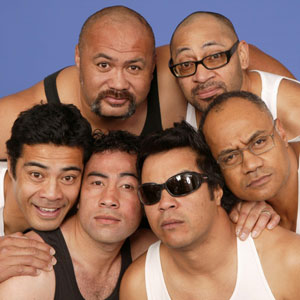 The group started in 1998 with their first stage production titled ‘Naked Samoans Talk about Their Knives’ (the title is a parody of a New Zealand film ‘Topless Women Talk About Their Lives’). Appearing in several cities in New Zealand, their show was a success. This led to a series of successful productions in theatre that brought media attention to the entertainers. Their material on subjects like racism and violence were surprising to some, but nonetheless their base grew.

They have taken their anarchic brand of comedy across the seas to Scotland and Australia, receiving outstanding reviews.

The Naked Samoans still do special appearances and one off shows with their most recent performance at the Auckland Arts Festival in 2018 premiering their latest show, in conjunction with The Conch Charitable Trust, “The Nakeds Samoans Do Magic”.

ENQUIRE ABOUT The Naked Samoans